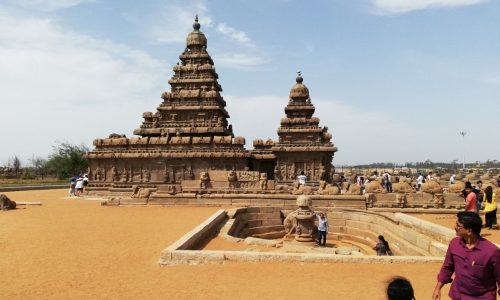 The Shore Temple (built in 700–728 AD) is so named because it overlooks the shore of the Bay of Bengal. It is located near Chennai in Tamil Nadu. It is a structural temple, built with blocks of granite, dating from the 8th century AD. At the time of its creation, the site was a busy port during the reign of Narasimhavarman II of the Pallava dynasty. As one of the Group of Monuments at Mahabalipuram, it has been classified as a UNESCO World Heritage Site since 1984. It is one of the oldest structural (versus rock-cut) stone temples of South India.

Marco Polo and the European merchants that came to Asia after him called the site Seven Pagodas. One of these is believed to be the Shore Temple. The temple probably acted as a landmark for navigation of their ships. As it appears like a Pagoda, the name became familiar to the seafarers. The tsunami of December 2004 that struck the coastline of Coromandel exposed an old collapsed temple built entirely of granite blocks. This has renewed speculation that Mahablaipuram was a part of the Seven Pagodas described in the diaries of Europeans, of which six temples remain submerged in the sea. The tsunami also exposed some ancient rock sculptures of lions, elephants, and peacocks that used to decorate walls and temples during the Pallava period during the 7th and 8th centuries.