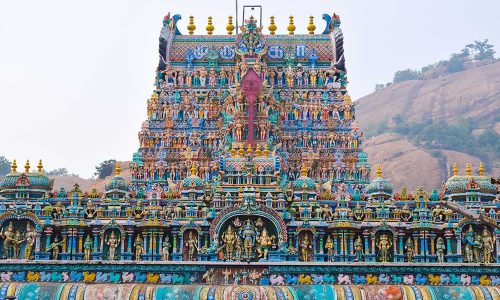 Madurai is an energetic, ancient city on the Vaigai River in the South Indian state of Tamil Nadu. Its skyline is dominated by the 14 colorful gopurams (gateway towers) of Meenakshi Amman Temple. Covered in bright carvings of Hindu gods, the Dravidian-style temple is a major pilgrimage site. Millions attend the processions and ceremonies of April’s Chithirai Festival celebrating Meenakshi and Lord Vishnu.

Tiruchirappalli Rockfort is a historic fortification and temple complex built on an ancient rock. It is located in the city of Trichy. The fort played an important part during the Carnatic Wars, helping lay the foundations of the British Empire in India.

Thirumalai Nayak Palace is a 17th-century palace erected in 1636 AD by King Tirumala Nayaka, a king of Madurai’s Nayaka dynasty who ruled Madurai from 1623–59, in the city of Madurai, India. This Palace is a classic fusion of Dravidian and Rajput styles. The building, which can be seen today, was the main Palace, in which the king lived. The original Palace Complex was four times bigger than the present structure. In its heyday, the palace was considered to be one of the wonders of the South.