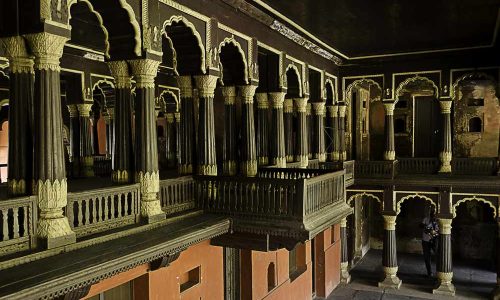 The palace is located in the Bangalore Fort which is situated in old Bangalore in the south-west Indian state of Karnataka. An exquisite example of Indo- Islamic architecture, the opulent palace was once used as a summer retreat by the king and was often referred to as the ‘Abode of Happiness’ and ‘Rash e Jannat’ meaning ‘Envy of Heaven’. Amongst one of the most noteworthy creations of the ancient times, the palace boasts of ornamental frescoes, magnificent arches, protruding balconies and brilliant motifs. One can take a good leisurely stroll across the balconies before entering the palace. One is bound to get a glimpse into the royal lifestyle of Tipu Sultan as they explore the palace.

Sri Radha Krishna Temple has deities of Radha and Krishna located at Rajajinagar, in North Bangalore, Karnataka, India. It is one of the largest ISKCON temples in the world. Hare Krishna Hill is the hillock on which this temple is situated. There is a gold-plated dhwaja-stambha (flag post) 17 m (56 ft.) high and a gold plated kalash shikara 8.5 m (28 ft.) high.

Lalbagh Botanical Garden is located in Bangalore and is nationally and internationally renowned centre for botanical artwork, scientific study of plants and also conservation of plants. A haven for all nature lovers, Lal Bagh covers an area 240 acres in the heart of the city and has nearly 1,854 species of plants. It was commissioned by Hyder Ali in 1760 and completed by his son Tipu Sultan. The garden features rare plants of French, Persian and Afghani origin and has attained the status of a Government Botanical Garden. The Lal Bagh Rock which is over 3000 million years old is found here and is a major tourist attraction.

Lalbagh Botanical Garden has one of the world’s largest collections of rare plants.