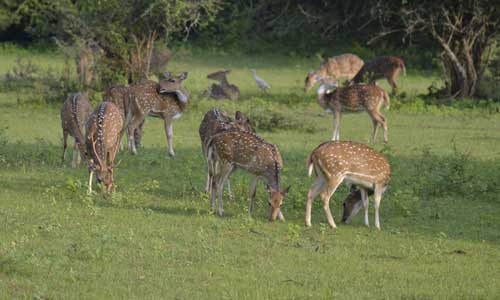 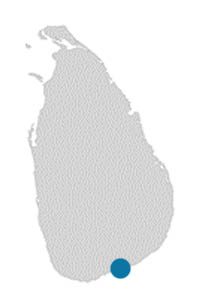 Yala (යාල) National Park is the most visited and second largest national park in Sri Lanka, bordering the Indian Ocean. The park consists of five blocks, two of which are now open to the public, and also adjoining parks.

The park covers 979 square kilometres (378 sq mi) and is located about 300 kilometres (190 mi) from Colombo. Yala was designated as a wildlife sanctuary in 1900, The park is best known for its variety of wild animals. It is important for the conservation of Sri Lankan elephants, Sri Lankan leopards and aquatic birds.  Yala hosts a variety of ecosystems ranging from moist monsoon forests to freshwater and marine wetlands. The number of mammals that has been recorded from the park is 44, and it has one of the highest leopard densities in the world. The area around Yala has hosted several ancient civilizations. Two important pilgrim sites, Sithulpahuwa and Magul Vihara, are situated within the park.

The elephant herd of Yala contains 300–350 individuals.[13] The Sri Lankan sloth bear, leopard, elephant, and wild water buffalo are all threatened mammals that Yala harbours. Toque macaque, golden palm civet, red slender loris, and fishing cat are among the other mammals that can be seen in Yala. The Yala National Park is the most visited park in Sri Lanka.