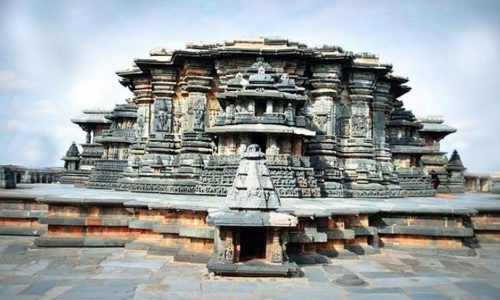 An incredibly breathtaking example of Indo – Saracenic style of architecture, the Mysore Palace is a magnificent edifice located in Mysore in the state of Karnataka. Also known as the Amba Vilas Palace, it is the former palace of the royal family of Mysore and is still their official residence. Mysore Palace was built in the year 1912 for the 24th Ruler of the Wodeyar Dynasty and is counted amongst one of the biggest palaces in the country.

The facade of the palace is a harmonious blend of Hindu, Muslim, Rajput and Gothic styles which imparts it a regal quality. It is the second most visited historical monument visited by both local and foreign tourists after the Taj Mahal.

It is a three-story stone structure with marble domes, and has a 145-foot five-story tower. The palace is surrounded by a large garden. The entrance gate and arch hold the emblem and coat of arms of the kingdom of Mysore, around which is written the kingdom’s motto in Sanskrit: (never terrified). The land on which the palace now stands was originally known as puragiri (literally, citadel), and is now known as the Old Fort.  The current structure was constructed between 1897 and 1912, after the Old Palace was burnt ablaze