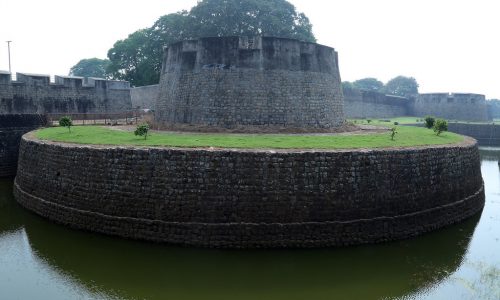 The Palakkad Fort in Kerala is a beautiful historical monument that has gently integrated its high walls with its surrounding green gardens. One of the most well-preserved forts in the state of Kerala, the Palakkad fort was built in the 1766 AD by Hyder Ali and is now a protected monument under the Archaeological Survey of India. This picturesque fort is located in the heart of Palakkad town at the foothills of the Sahyadris range in a labyrinth of dense forests and crisscrossing cascading rivers. The mighty fort is spread over an area of 60,702 square meters and is immensely famous for its architecture, which displays the efficiency of the French craftsman. The magnificent fortress of Pallakad is an essential part of history, and its construction is majestic as well.

The fort is in the shape of a square and is supported by walls and bastions which are square shaped as well. A significant ground is also present within the premises of the fort, which served as stable for the horses and elephants of Tipu Sultan’s army in ancient times; it is currently used as the venue for cricket matches, exhibitions and public gatherings. The Palakkad Fort is said to have existed from very ancient times, but believed to be constructed in present form in 1766 A.D,