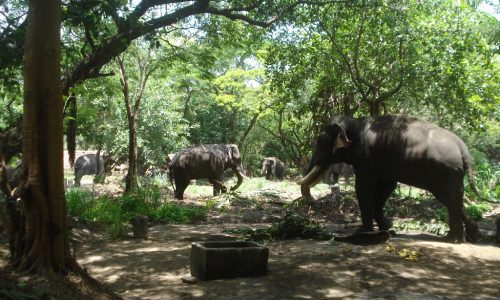 Punnathurkotta was once the palace of a local ruler, but the palace grounds are now used to house the elephants belonging to the Guruvayoor temple, and has been renamed Anakkotta (meaning “Elephant Fort”). This Elephant Camp houses 58 elephants in 11.5 acres of land and is home to the largest number of captive elephants. During the month July elephants are given special ayurvedic treatment and food. The elephants are ritual offerings made by the devotees of Lord Guruvayurappa.

Described as a ‘Palace for Elephants,’ [2] this facility is also used to train the elephants to serve Lord Krishna as well as to participate in many festivals that occur throughout the year. The oldest elephant is around 82 years of age and is called ‘Ramachandran’. The rituals of Gajapooja (Worshipping Elephants) and Anayoottu (Feeding Elephants) are observed here, as an offering to Lord Ganesha.