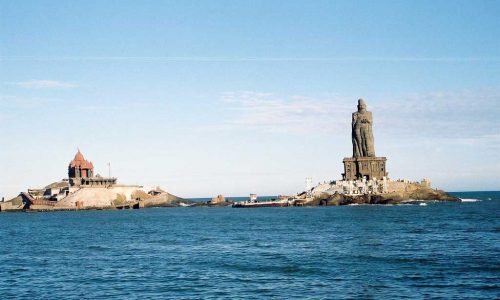 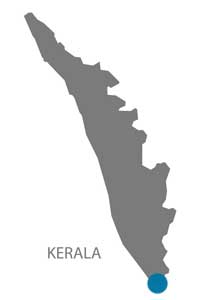 Kanyakumari – The Southernmost Tip of India at the southernmost tip of India, where the Arabian Sea, the Indian Ocean and the Bay of Bengal meet, lies Kanyakumari, an important pilgrimage site. The Kumari Amman Temple, here, is dedicated to Parvati as Devi – Kanya – the virgin goddess who did penance to obtain the hand of Lord Shiva.

Two rocks reach out of the ocean, south-east of the Kumari Amman Temple. One of these is Sri Padaparai, where the footprints of the virgin goddess are to be seen. On this rock, Swami Vivekananda is said to have sat in deep meditation; and here stands the Vivekananda Rock Memorial, built in 1970…

The place derives its name from the goddess Devi Kanya Kumari, considered to be the sister of Krishna, a goddess is believed to remove the rigidity from the mind, to which women pray for marriage. In 1656, the Dutch East India Company conquered Portuguese Ceylon from the Portuguese, and the name eventually corrupted to “Comorin” and was called Cape Comorin during British rule in India. The city was later renamed Kanyakumari by the Government of India