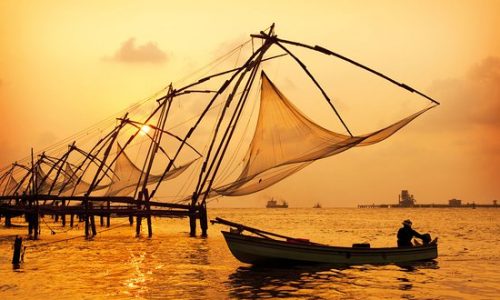 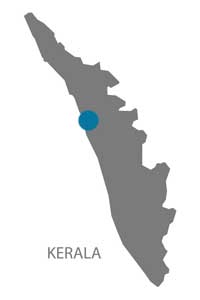 Chinese fishing nets are a type of stationary lift net in India. They are fishing nets that are fixed land installations for fishing. While commonly known as “Chinese fishing nets” in India, the more formal name for such nets is “shore operated lift nets”. Huge mechanical contrivances hold out horizontal nets of 20 m or more across. Each structure is at least 10 m high and comprises a cantilever with an outstretched net suspended over the sea and large stones suspended from ropes as counterweights at the other end. Each installation is operated by a team of up to six fishermen. While such nets are used throughout coastal southern China and Indochina, in India they are mostly found in the Indian cities of Kochi and Kollam, where they have become a tourist attraction. This way of fishing is unusual in India and almost unique to the area, as it was introduced by Chinese explorers who landed there in the 14th century. Indeed, one interpretation of the city name Kochi is ‘co-chin’, meaning ‘like China.

The system is sufficiently balanced that the weight of a man walking along the main beam is sufficient to cause the net to descend into the sea. The net is left for a short time, possibly just a few minutes, before it is raised by pulling on ropes. The catch is usually modest: a few fish and crustaceans, which may be sold to passers-by within minutes.