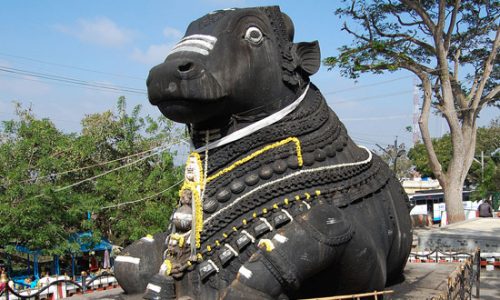 The Chamundeshwari Temple is a traditional Hindu temple located on the eastern edge of Mysore at the height of 1000ft on the Chamundi hills. Dedicated to and named after goddess Durga. Being one of the oldest temples in the palace city of Mysore, the temple is a must-visit attraction for the travellers. There are two options for the visitors to reach the Chamundeshwari temple, either by steps or by driving through the interwoven valley road.

The idol of goddess Durga here is adorned every day and worshipped by a number of priests. The deity is offered a variety of fruits, coconuts and flowers to show respect and reverence. Located atop the Chamundi hills, the temple is usually not too crowded. The original shrine is thought to have been built in the 12th century by Hoysala rulers, In 1659, a flight of one thousand steps was built leading up to the 3000-foot summit of the hill.